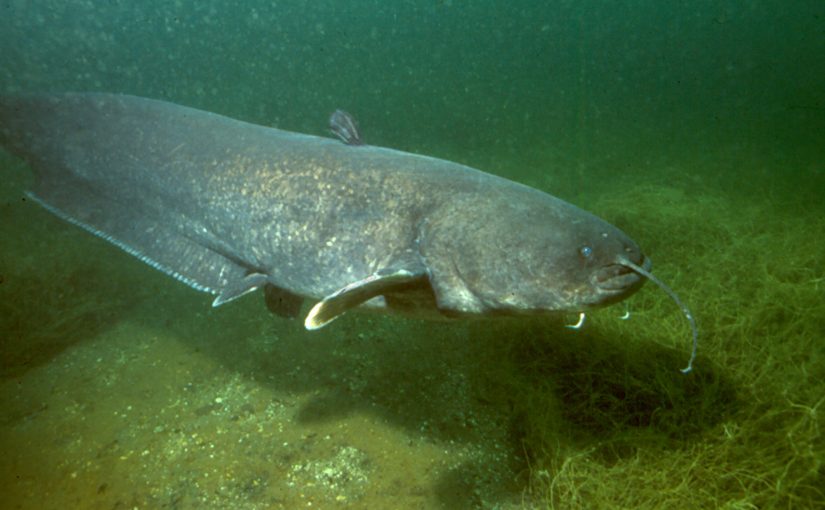 Notes:
The inclusion of the Greek form demands an extension of the root with initial *h2s not otherwise warranted, although possible. De Vaan’s suggestion that Latin is an internal derivation to homonymous squālus ‘unkempt, dirty’ (2008: 584) is semantically unconvincing, and the Italic s- form gains plausibility in light of Greek. The semantic development of a riverine ‘fish’ to a maritime ‘whale’ in Germanic, Old Prussian ‘catfish’ or Italic ‘large sea fish’ is not surprising in light of the native distribution of the catfish, a large river fish, historically absent in Western Europe (fishbase.com). The circumstantial evidence in favor of the Graeco-Aryan sub-set is presented by Rodriguez (1989). Kroonen reconstructs the word internally in PIE as a derivation from the verbal root *kwelh1– ‘to turn’ (item 80) → *kwol– ‘the turner’ (2013: 262), but this fails to explain the consistent a-vocalism, which presents an additional problem for the age of the stock. In defense of an old PIE item, and given the distribution of the wels catfish on the Pontic steppes, loss may be expected in emigrant branches such as Anatolian, Celtic, Armenian, etc., although this is very ad hoc and fails to account for the lack of Slavic evidence. There are no reflexes in Anatolian and Tocharian, but the intricacies regarding this particular sphere are salient, especially in the former branch (cf. Mallory & Adams 1997: 204f.).

There are several phonemic features that are relevant to the comparison with the Uralic material. Most salient is the unquestionable IE labiovelar which does not exist in traditional reconstruction of Proto-Uralic, and there is no vocalism that could round the velar from assimilation. Although strictly tentative, Samoyedic Selkup does alternate two different reflexes of Uralic initial *k-, viz. q– and k-, that are seemingly unconditioned by the phonetic environment (Collinder 1960:50), and further seems to correspond to IE labiovelar comparanda, cf. *gwelh1– ‘die’ (item 26) with q- for PIE *gw– opposing k- for *k̂-, e.g. *k̂uon (item 72) and pronominal kut ‘who’ for PIE *ku– (traditionally reconstructed as PIE *kw-, cf. Bjørn 2016: 9ff.); Attractive, of course, in light of the Indo-Uralic hypothesis, the ramifications to Uralic linguistics of this analysis are palpable as it demands an expansion of the traditionally reconstructed phoneme inventory of Proto-Uralic, and it is important to stress the caution with which this proposal is put forward, including this author’s very limited familiarity with the Samoyedic languages in general, and Selkup in particular. Confounding factors include some variation within the interrogative pronoun [see further in the comments below]. Rédei suggests further connections among the steppe languages, cf. Proto-Tungusic *kcolo ‘fish’ (UEW: 119), that similarly could provide a comparable phonetic environment. Within such a paradigm, ancient loan relations may work in either direction. A substrate origin has been suggested by Schrijver (2001: 423), but it has to be very old to account for widespread Uralic occurrences, incl. Samoyedic, as well as a diverging PIE dialect continuum. A very early loan Uralic > PIE seems to be the most probable solution, although chance resemblance in some of the more southern IE branches may strengthen the case for a later borrowing with more limited regional distribution in Northeastern Europe.