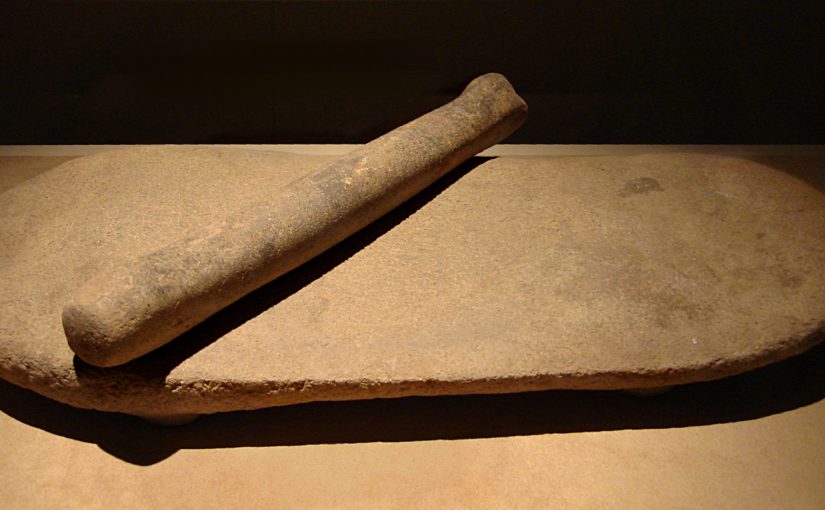 Notes:
The noun is traditionally derived from *gwher– ‘heavy’, and despite some controversy to the provenance of Tocharian it seems best reflected within this bulk (Adams 2013:176); this evidence is accompanied by the question whether ‘millstone’ is a narrowing of original ‘stone’ (Winter 1998: 351) or a broadening of the inherited ‘millstone’. If, indeed, Tocharian represents the second (known) branching of ancient PIE, the former hypothesis seems natural, and consequently preferable.

Discussion:
The Semitic loan etymology is defended by Dolgopolsky (1987: 16 and 1989: 6) and Takács (1997: 374) for their phonetic similarity, while Mallory & Adams (1997: 474) and Diakonoff (1985: 128f.) ascribe the similarity to sheer chance. The latter addresses the semantic gap between an IE ‘millstone’ and a purported Semitic ‘threshing floor’, which may only be bridged through the dialect semantics of Arabic ‘mortar’ (Gamkrelidze & Ivanov 1995: 770f.), but without similar variation in the ancient Semitic languages, this meaning is most probably innovated and without consequence for the present inquiry. Thematically the implement, or facility, belong to the agricultural package and should, if viable, be considered within that same context. All things considered, the Semitic comparandum requires a difficult semantic drift, especially for a purported technical loan, that renders chance resemblance the favorable option. Otherwise semantically attractive is the case for a North Caucasian connection, where a native verbal root seems to constitute the derivational basis for the implement (S. Starostin 2009: 96f.), which is a point of criticism with Matasović (2012: 290). Such a connection would, however, render the PIE system folk-etymologically associated with the root for ‘heavy’ and possibly separate Tocharian from the stock, rendering a transfer into late or late middle PIE the most likely scenario.